“Orgull de Baix” (Baix Pride) is a multi-platform project that explores the ecological and agricultural treasure trove that is the Baix Llobregat region, its history and the struggle by its inhabitants to maintain its identity (which is closely linked to the river, the delta and the food its land produces), and to overcome the urban development pressure exerted by the big city that is its next-door neighbour, Barcelona.

“Orgull de Baix” deals with farming in urban environments, food sovereignty, the tension between the centre and the periphery, between urban and rural spaces, and between growth and sustainability.

And it does so using a range of different media: a documentary “El pati del darrere” (The Backyard), a web documentary and actions taken via the social media.

FROM BACKYARD TO “ORGULL DE BAIX”

Baix Llobregat is a region that has been subjected to excessive growth. The fact that it lies right next door to Barcelona has turned it into a service gallery for the big city.

However, beneath the communication infrastructures that cut across its landscape, we can find some of the most fertile agricultural land in Catalonia, a delta that is a strategic stop-off point for birds migrating across the western Mediterranean region, and a river, the Llobregat, which is responsible for all of the above, and which the territory is organised around.

But there is also the strong sense of pride that the inhabitants of Baix Llobregat feel for their region, and for the individual identity they have created in their constant struggle to avoid being absorbed into the big city next door.

It is Barcelona’s backyard… But this land, which is under permanent threat from property speculators, might well be strategically important for the future and sustainability of all.

“Orgull de Baix” is a web-based extension of the documentary “El Pati del darrere”. It is an interactive space which supplements the documentary film’s narrative by offering users a virtual travel experience through the region by means of a navigable 3D map that has been specially prepared to receive extra audio and video content.

“Orgull de Baix” is a space that allows users to explore the landscape, history and people of the Baix Llobregat region, and which – through the voices of its inhabitants – opens a debate over the future of the area, (and by extension, a debate over the growth model to be used for cities in the 21st century).

The 3D interactive map with webgl and three.js that we are developing is being constructed using information provided by the Cartographic and Geological Institute of Catalonia.

We include these sketches so that you can see what “Orgull de Baix” will look like. 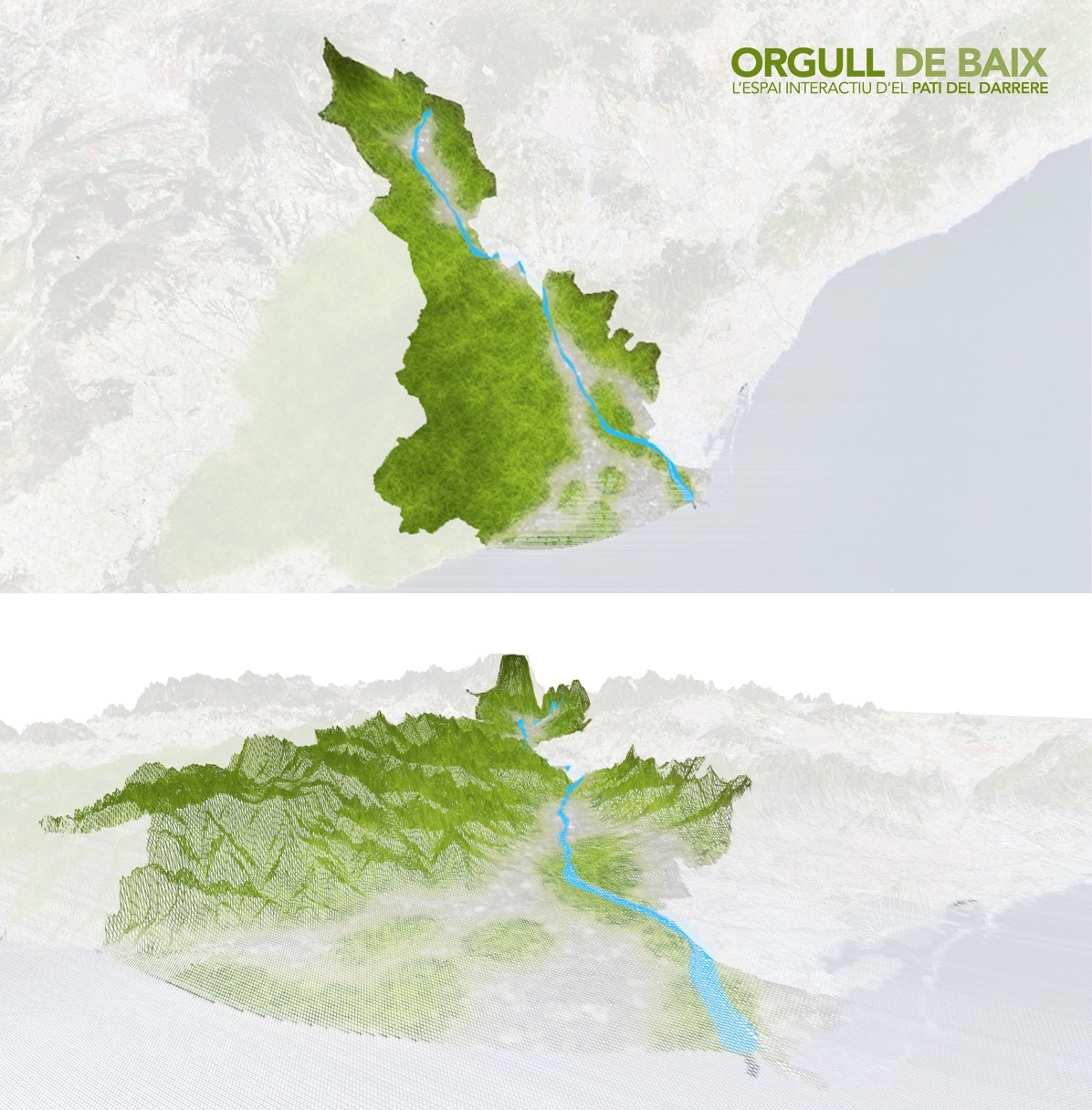 With the support of

The documentary “The backyard” (El pati del darrere) the Baix Llobregat region as you’ve never seen it before.

Baix Llobregat is an area that everyone has seen, but very few people really know.

Comprised of 30 municipalities and over 800,000 inhabitants, it is one of the most invisible and least-appreciated regions in Catalonia. For many people in Barcelona, it is simply an area that you have to cross to get to somewhere else. In 2012, plans were tabled to build the largest leisure complex in Europe here – EuroVegas – right in the middle of the Baix Llobregat Agricultural Park. When the local people mobilised to halt the project, it became one of the most important chapters in the history of local social movements. And as a result of these protests, the inhabitants of Barcelona realised, for the first time, the importance and value of this territory, and it led them to defend it. But the threats have not gone away.

The documentary “El Pati del darrere” is a portrait of the Baix Llobregat, which is at the same time one of the most artificialised areas in Catalonia, and the green lung of the metropolitan area. It is not only the region with the largest accumulation of infrastructures in the country, it is also the market garden that produces 15% of the food consumed in the city. It is a region that is in constant danger from reclassification of zoning regulations and territorial changes. A region that is little-known and commonly underappreciated, but one which is fundamental for ensuring the balance and sustainability of the lives of the almost 5,000,000 people who travel through the metropolitan area of the Catalan capital every day.

“El pati del darrere” is a Televisió de Catalunya production, in collaboration with Al Pati Produccions, and was first broadcast on 1st December 2015 on the programme “Sense Ficció”.

If you haven’t seen the documentary yet, you can watch it here:

THE MAIN CHARACTERS IN THE FILM

The documentary “El pati del darrere” is a

production in collaboration with

This wall displays all the movement that #OrgulldeBaix and “El Pati del Darrere” have generated so far on the social media.

If you post something using our hashtag #OrgulldeBaix, it will be included in this display.